skip to main | skip to sidebar

Its been a week, in fact more than a week but C2D memories are still fresh. We are still exchanging photographs (in fact I wanted to upload the best photograph here but I was really confused...Every photograph has its own story!!).
Waah...ahaaa these are only words that I want to use to describe C2D conference. Here I would like to mention that though I am from TBGO, this blog is for all of us. After all we are a team: TEAM OSDD. Our bosses tried hard (really hard) to separate us using the names of the two teams (My apologies to both the bosses) but hey guys we still came together and this was seen during the conference as well, when students from both the teams interacted, discussed and shared their knowledge.
After 3-4 months of online work, the onsite part started with the workshop where everyone was new and just were not more than chat friends, had lots of work pressure and deadlines (aiyoo deadlines). But finally we (at least IPW) achieved what we decided and got our annotations curated and waah gr8 job done by Dr. Anshu's students with Dr. Kitano, Dr Samik Ghosh, Yukiko and Dr. Nagasuma's guidance. The network poster needs no explanations or descriptions. It says everything itself where hardwork interwoven with several neurons resulted in such a big achievement. When IPW team's poster was one of the landmark achievement's of the conference, Team TBGO wonderful act on the stage was the one of the major topics of discussion throughout the conference. With a second special screening of the skit for SKB, and a detailed discussion with SKB, TBGO team leaders were really flying high.
Attending wonderful talks, tweeting the whole day with new netbooks, meeting different people...aaahhh I don't have many words to explain all this. Moreover I would also like to mention the gr8 performace by Sahara Band on the last day where everyone jumped on th stage and converted a decent band to a bhangra party (Yess....Saakshi we finally managed to do this....Guys, we always wanted to have a JAM session and we did that!!!)
And hey how can I miss the media coverage......We were on TV as well ...btw I hvnt seen that myself if anybody has seen that do inform me.....Anupam Me and Saurabh with Anshu mam, SKB, And our Science minister gave interviews to Aj Tak, CNBC....gr8!!
Professionally what else can you expect and when you get so many good friends...fulltooshh enjoyment then you have achieved everything......
Hope to see you all again in the second round of C2D as well!!!!
Posted by Deeksha at 9:51 AM 1 comment:

Today the IPW Team was delighted to see the Mtb Network on a POSTER that they have generated in past few days. There was a lot of enthusiasm and excitement. Prabhakar tried his best to pin up the poster with help from the team, and Samik and Yukiko providing full support to them. The Project Director, Zakir Thomas, was also a part of this activity and the Volunteers captured the Team with their Network :)

Look forward for more from this dynamic and talented members of IPW..
Posted by Anshu at 11:09 PM No comments:

The exciting science journey on second day at JNU started with presentation by Kiran katoch on "The Problem of TB in India, A Clinicians Perspective". Her speech gave us a clear view about problems in diagnosing TB as well as the current methods and the developing methods in diagnosing TB. After her speech we were gathering information regarding the importance of computational technology in life sciences. Presentation by GPS Raghava, Samik Ghosh and Hiroaki Kitano on bioinformatics threw limelight on computational biology.After having a good lunch, our journey continued with the presentation of work done by IPW team. To get ourselves refreshed IPW team got game for us using cell designer software (sow & grow). Science requires collaboration of information from various disciplines and this was exemplified yesterday. We as TBGOs learnt the basics of cell designer which can be used for our future strategy.

After a number of serious lectures, we had an enjoyable interaction with our PI, our team members and ZT sir. We all got to know about each other and shared our experiences.We had a good dinner and went to YVK eagerly waiting for the dawn to continue our journey.
Posted by saakshi jalali at 11:07 PM No comments:

After an interesting first day of the C2D '10 conference, with a rocking TBGO team's drama performance, IPW's funny video, the annotators looked forward to a normal day at JNU.
Kiran Kotoch talked about the problems of TB in India in a Clinicians' perspective. Some of the clinical difficulties encountered are early diagnosis of the disease, multi-system involvement, Co-infections, latent tuberculosis, Dormant infection, etc., and the prevention of the disease and vaccines administration is a challenge. It is interesting that no new drugs has been administered for the last 20 yrs.!!!
Some of the methods under program to diagnose the disease are sputum smear microscopy, radiology to a limited extent, culture diagnosis, line probe assays / PCR or biopsy, FNAC, specimen from affected organ. Sputum microscopy is relatively faster and the resports are available in 24 hours. But this can be done only when there are atleast 10000 baccilli. Moreover a dead bacilli and a live one cannot be differentiated. Other tests that are used are gamma interferon assay, chromatography – mycolic acid patterns by HPLC, macrophage based methods – viability of mycobacterium but low sensitivity, patch test with TB MPB 64 (– not evaluated in endemic countries).

GPS Raghava introduced to us the drugPedia and MycoTB which is an In silico approach. MycoTBis an open source software for managing Mysobacterium tuberculosis data exclusively. Samik Ghosh and Matsuaka Yukiko taught the participants of the conference about the software, Cell Designer. After lunch the members of the IPW team helped the other members from the Glycomics, Gene Ontology Annotation team, Protein structure/Fold Annotation team, Glycomics of Mtb team and Immunome of Mtb team. They were patient to teach all the participants even when being asked again and again.

At dinner time, the TBGO team had a round of introduction . The team leaders shared their experiences with the members and they taught the members the mistakes that they see in the members' annotated sheets. Members was recognized by their E-mail id.s rather than their names!!! Most of the members belong to the Hanger's group and he was on cloud nine whenever his name or his team members talk aloud!!! Fellow annotators thanking Swathi Gandhi's helping character, Chotu re-enacting his piece of drama, VS answering the questions from the annotators were some of the interesting happenings of the discussion. ZT joined the team later in the discussion and enquired the annotators about their experience. Most of the students agreed that their motivational factor was the thought that their work would help save millions of Tb patients across the globe!!! One of the annotators Hemant expressed his view on the Indian educational system and suggested that students shouldn't be evaluated by the marks given, but by their hardwork, innovation, intellect and commitment.

After a nice dinner, the participants returned to Vishwa Yuva Kendra for a good night sleep!
Posted by saakshi jalali at 10:58 PM 1 comment:

Most awaited day " C2D conference " started with warm welcome by Zakir Thomas follwed by introduction of OSDD theme and the potentials of this program by our SKB.we had speakers from various parts of the world. We had an interactive session with the cheif guest hon'ble ministry of science. After a very long serious session, we the TBGO team breaked this seriousness by a comic skit (TBGO annatation club) which made everyone to sit straight. TBGO rocked the first day. TBGO GOing..........
The TBGO team after the conference went to India Gate and had very nice time with our friends.After having our dinner, we went to sleep dreaming about tomorrow's exciting science journey.
Posted by saakshi jalali at 10:21 PM No comments:

INDIA stands unique among other countries for its" UNITY IN DIVERSITY" and I experience it now. Number of people with different age groups, languages,custom have joined here to build a strong INDIA-FREE from poverty, disease through science. The young minds are ready for science journey to build a strong INDIA through "C2D".This will serve as a starting point for the indian economic progress with experienced minds guiding he enthusuastic young minds
Posted by saakshi jalali at 10:09 PM No comments:

Woww...What a start!!!!!!
TBGO team rocked C2D...
Three Cheers for all the students. 9 Team leaders joined us almost a week before the conference. After long working sessions of curations, they practiced whole night to prepare a skit which they executed very very well on the stage.
They recieved great applause!!!! Guys the skit was in high demand and we performed the skit again.... a special screening for SKB :)
After a long, tiring day, students got to enjoy a lot at the INDIA GATE.
Ubuntu Chris, DiponLove, The Moderator, Sleeper Deeper, SS, Silent peacemakers accomapanied by other members and the managers with our very own Ekta.
But we won't stop here. There are many goals yet to be accomplished. 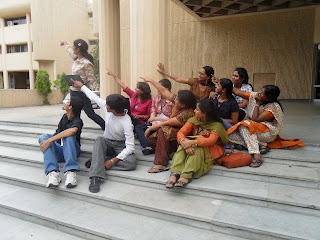 Higher and Higher!!
Posted by Deeksha at 9:17 PM No comments: